Growing up - An adult (in) business 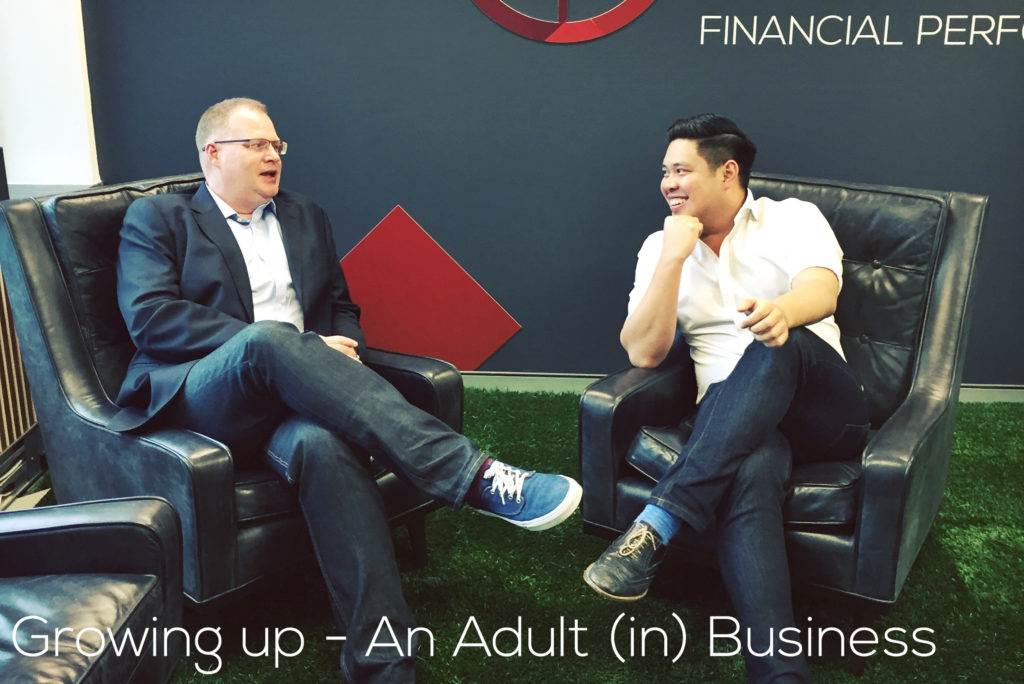 Last month, My Accounts onboarded two new shareholders – Matthew Rowe as an Executive Director and Andrew Walsh as a Non-Executive director. This not only triggered something akin to a ‘grow up’ period for My Accounts, but also for me personally.

To add some expertise to my exploration, I interviewed one of our new shareholders Matthew Rowe on a Facebook Live Interview on Thursday the 22nd of September so that I could get his thoughts on the concept of growing up in business through his various roles advising business owners through their growth stages.

Below is an edited transcript of this interview.

Noel (NT):             Matthew, by way of background, can you please provide a summary of your roles in advising small business?

Matthew (MR):    Sure. I’ve chaired family offices for high net worth families. I act as a board advisor and board member for a number of boards – from not-for-profits to people in the health space, professional practices and a number of clients as well. I’ve had a mixed-bag of experience. I wouldn’t say I’ve seen it all Noel, but I’ve definitely seen enough to know what not to do.

NT:                         You’ve definitely seen a little more than me! In your last full-time role, you were the Managing Director at Hood Sweeney. At what point there did you realise you’d become an adult business?

MR:                        I think when we had an ASX listed shareholder take equity in our business. Going through this due diligence process, showing them that we had continued growth potential, systems and processes, governance, financial disciplines and a talented bench-strength.

MR:                        I think that would’ve been the time we recognised and agreed as a group of shareholders in the business that we weren’t good at doing everything ourselves, even though we thought we were. We had to go and get some outside assistance. For example, because we’re a people business, one of the best things we did was take on an HR professional – a guy called Jock Duncan who’s got a Master’s Degree in Psychology and he helped us with the people element immensely.

MR:                        Managing cash flow and understanding the levers in the business – particularly the operating cash cycle. You can be making a profit and still go broke – you need cash. So that was one. The second – the planning aspect and not dedicating enough time to planning. The third would be about people management. Particularly the management of the shareholder group.

MR:                        We hit a point in our history where we hadn’t been managing our debtors, work in progress and the cash flow for our business well enough. It came to crunch time where we were going to have to put our hands in our pocket. That’s always a defining moment in terms of a burning platform.

Once we got through that burning platform, we realised that we had to be more on top of our own numbers – we actually got our own CFO and made sure that those mistakes were never made again.

It has to become a core competency within your skill set. If it doesn’t, you’re just going for a walk. You’ve actually got to dedicate the time – it’s an investment.

MR:                        With the benefit of hindsight, I think if we had spent more time initially planning things rather than just doing them. There’s a great saying that action without vision is a daydream, but vision without action is a nightmare and I agree with that.

Also, if you’re going to go and make an acquisition or do a merger… I don’t know too many that actually work out really, really well. There are some statistics going around that about 80% tend to not add to shareholder value. The key decision point is, what’s this going to do for shareholder value? It’s not just about looking at a profit line number.

NT:                         Something I’ve learnt from talking to business owners whilst researching for this interview is this concept of ‘growth-hacking’ –  it’s a common buzz word that’s floating around on Social Media. How do you feel about this concept?

MR:                        Growth-hack and disruption, these are words that are being thrown around a lot at the moment, but let’s deal with growth-hack. I think that there is no magic bullet to growing a business. If you’re going to grow the business, you need to make sure you’re doing it in a sustainable fashion. Growth-hacking can deal with different marketing channels now, social media in particular, not just going through the traditional methods – and I absolutely understand that – but there’s no point going and putting your growth trajectory on steroids and then not backfilling and having things in place that will mean that you can bed that down; so you can embed the growth you’ve got to make sure that your business is sustainable going forward.

MR:                        I think that being in your own business and being an entrepreneur, a start-up, is a very, very lonely thing at times. I would be talking with people that have done it. Find a mentor or an advisor. With advisors, there’s a lot out there that say that they’re coaches or advisors. I would find people that you can actually ask or explain within your background and industry, ‘how have you done it?’ and ‘tell me the story’. Not a lot of people are the actual bus driver, but there’s a lot of passengers on that bus.

So don’t be alone. Find people that you can talk with that you respect, you rate, and that are actually driving a bus, not just a passenger on a bus.